Step 5 – Strategize, plan and structure to meet the objective

A great plan comes from absolute attention to detail, which is key to setting up and structuring for success.  Not only do you want to meet the general goal, but set up a specific standard.  A general goal might be to answer calls quickly.  A specific goal would be to answer all calls in an average of 30 seconds.

Before you start planning, you need to know the general and specific goals, the expectations, the type of products and/or services, what is coming down the pipeline, or the anticipated projects in the near future.  Each situation calls for a different plan.  Some plans are smaller and not as important, whereas some are major projects with utmost priority.  You need to know which projects to start planning on first and be prepared for any surprises that may come your way.  You will normally find out during your management meetings with your boss or upper management what is to be expected (which was covered in step 1).

Once determined, you start planning on how to accomplish the task at hand.  You should first share this information with your key staff members like your supervisors, leads, and your subject matter experts (or SME, pronounced “smee”).  You will most likely use a whiteboard to chart all the requirements.  If there is any confidential information, use initials or codes that only you and key members of your staff understand.  There may be just one big project that requires your full attention, or many smaller projects working concurrently.  In most cases it is both.  It is important that you prioritize the most crucial projects.  You need to be able to make the right call.

You also need to create and stick to a realistic timeline.  It needs to be challenging yet attainable.  Map out the plan from start to finish with a description of each task and projected completed dates.  Again, think about the saying, “Under promise and over deliver.”  What might look amazing to upper management at first could come back to haunt you when you miss your target date.  Depending on the type of business, a simple spreadsheet will normally do.  If it is a large and intense project, Microsoft Project Manager is a great tool to use. 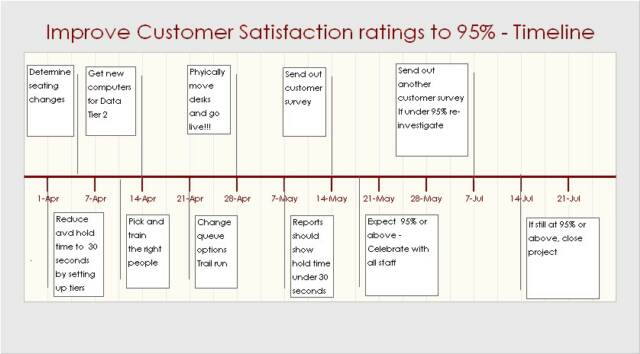 Whether you inherited the department by being promoted from within, or from another department or another company, the best time to plan and make major structural changes is within the first couple of months of becoming manager.  However, be careful if you are following a manager who was very respected.  Major changes might look like a slap in the face and your staff might resent you for it.  It is much easier to make major changes when you follow a manager who was inefficient, even though it’s harder to clean up the mess that was left behind.

Upper management is usually more lenient about certain expenses and disruption while you are making your mark in your first few months as manager.  For example, you may want to re-organize the seating arrangement, request new computers, buy software upgrades, buy extra monitors, get better tools for the trade, get new uniforms, invest in advanced training, move to a new location, or even change the overall direction of the department.  Once you are settled and things are running smoothly, it is harder to get the finances to make major improvements, even if it is within your budget.

Lets look at a scenario from a customer service/technical support point of view in a company that provides telephone and Internet service.  Lets say you are a new manager who has taken over a department with poor customer satisfaction ratings due to long hold times that is also losing customers (known as “Churn”) because of repeat issues and the time it takes to repair the problem.  When you were hired by upper management, they let you know that your main objective was to improve customer satisfaction ratings and reduce churn.  After discussing with upper management and comparing industry standards, your goal as manager is to obtain the following metrics:

·         MTTR (Mean Time To Repair – which is the average time it took to open, troubleshoot and close the case) needs to be under 90 minutes

To obtain these numbers you first need to look at the way your department is setup. You would need to figure out problems such as the number of staff needed, how long each call should last, find out the skills sets of your employees, find the right balance between quality and quantity, etc.  You would also need to look at methods on how to make an effective and streamlined process to reduce call handle time.

The way the department is set up at the moment is one big group that takes on all calls, no matter the skill set or the nature of the reported problem.  These calls can vary from regular telephone service repair calls to Internet access repair calls.  These incoming calls can also vary from easy to fix repairs to intense troubleshooting repairs.  Some people’s strengths were more related to voice repair while others were more related to Internet data repair.  Unfortunately for the customer, when they called into repair, they were getting bounced around quite a bit.

After careful analysis, the best plan might just be to restructure the department. To make the department run more efficiently, it makes more sense to split the group into two teams, one that deals with voice repair issues and another that deals with data repair issues.  The next step would be to split those groups in two to have one team that answers the easy questions with short call handle times, and one that works on the harder and longer duration repairs.  A supervisor would be appointed to each team as well as a lead technician or a SME (Subject Matter Expert, pronounced “Smee”).  With a couple of programming changes to redirect the incoming call flow and some seating changes, the restructured plan would be complete.

Depending on the type of business you are in, many times it does helps to divide the department into a tiered structure.  You can create a team within each tier and modify the goals of each tier to fit the overall goal of the department.  You will need to determine both the physical setup (i.e. where your employees should sit and be grouped, etc) and the logical setup (i.e. the incoming call flow, etc).

Sometimes if you are lucky, one big group or an “all for one, one for all” strategy works, however, what usually happens is your better “A & B” employees spend half of their time with the simple issues or easy orders, while the “C” employees spend half of their time on difficult issues or the bigger/harder orders.  You’re A & B employees have a higher skill set and are your top performing employees.

Another incentive to create a tiered structure is to pay the more qualified people more money.  This gives incentive for the Tier 1 people to want to learn more in order to be promoted into the Tier 2 group.  This is a good idea as long as you have the money to do so in your budget.

Going back to the customer service example, what tends to happen is a call will be in queue (on hold in the order received), which tends to make the abandon rate increase (people do not like to be on hold…).  This also increases the time it takes to repair a problem and also results in more repeat cases because the less qualified employees are potentially working on the hard issues. The end result would then be a dissatisfied customer who would give poor marks on their satisfaction survey.  By breaking the department into a tiered structure, you would be able to set up the department like this:

1.      Tier 1 answers all incoming calls.  They have an easy to follow flow chart and would only answer questions that are easy in nature and do not take up too much time to explain.  Even though they have a flow chart to follow the troubleshooting steps, you should make sure they have adequate training to have the confidence to troubleshoot the basics on their own.  They have an average of 5 minutes per call to resolve the issue.  If they cannot resolve the issue, they would pass the call to Tier 2.

2.      Tier 2 takes over the call.  All of the troubleshooting done by the Tier 1 technician will be noted in the trouble case.  The Tier 2 technician would pick up from that point on, which will mean the customers would not have to repeat themselves.  Tier 2 has an average of 1 hour per case, as the problem will most likely take some time to troubleshoot.

What would happen with this simple yet effective set up would help reduce time in queue, which would lower the abandon rate, which would also reduce MTTR along with a reduction of repeat cases, which would leave the customer more satisfied, which would result in fewer customers leaving the company.  Higher customer satisfaction is achieved and the churn rate is reduced.  All of the objectives and goals would be achieved with this restructuring move.

The goals for each tier would be different.  You would not want to have a generic goal for both groups.  The goals for Tier 1 would be based more on quantity, whereas the goals for Tier 2 would be based more on quality.  That is not to say that Tier 1 shouldn’t do quality work.  It just means that Tier 1’s main goal is to answer calls quickly and if they do not know the answer, pass the call to Tier 2.  Tier 2 would also be expected to perform a certain quantity, but their main concern is more on reducing repeated issues and chronic type of problems.  Something to keep in mind, you can always have one group help the other in times of need.

Even though this example was based on a particular customer service scenario, the same logic could apply to any planning and structuring situations you might face.

Example_-_Timeline.xls
Click the icon to the right to download this file  >>>
Once the file is open, you can save it like you would any other file.  You will need to click your backspace button to return to this page..
The text of these materials, or any part thereof, may not be reproduced or transmitted in any form or by any means, electronic or mechanical, including photocopying, recording, storing in an informational retrieval system or otherwise, except for students own personal use. The author does specifically disclaim any responsibility for any liability, loss, or risk, personal or otherwise, which is incurred as a consequence, directly or indirectly, of the use and application of any of the contents of this course.
© 2009-2020 MasterClassManagement.com  All Rights Reserved
If desired, click to hear computerized text-to-speech.

This course is also available in book format.